Boxes of chocolates have become synonymous with Valentine’s Day. In fact, leading up to February 14th, Americans buy about 58 million pounds of chocolates. It’s a classic tradition that has become an iconic symbol of love. But when did our love for showing affection with boxes of chocolates begin?

Chocolate houses became as popular as coffee cafes, and royal families had private chocolate makers who would develop specialty blends believed to boost strength, creativity and stave off disease. Chocolate was a food of the Gods in Mesoamerica, and it didn’t take long for Europeans to see and embrace its divinity.

Though Valentine’s Day and the link between Saint Valentine and love was first referenced in a poem by Geoffrey Chaucer in the 1382 poem “Parlement of Foules,” it wasn’t until the Victorian era when the holiday became commercialized. During the 1830s, people began celebrating Valentine’s Day with cards, gifts and small tokens of affection – and the imagery of hearts, roses, and Cupid became linked to the occasion.

In England, the Cadbury family were not only famous for selling tea, coffee and drinking chocolates; they also gained prominence and wealth throughout the 1800s with their chocolate innovations. Richard Cadbury and his brother George Cadbury took over the business in 1861, and they were on a mission to improve upon the drinking chocolate recipe. 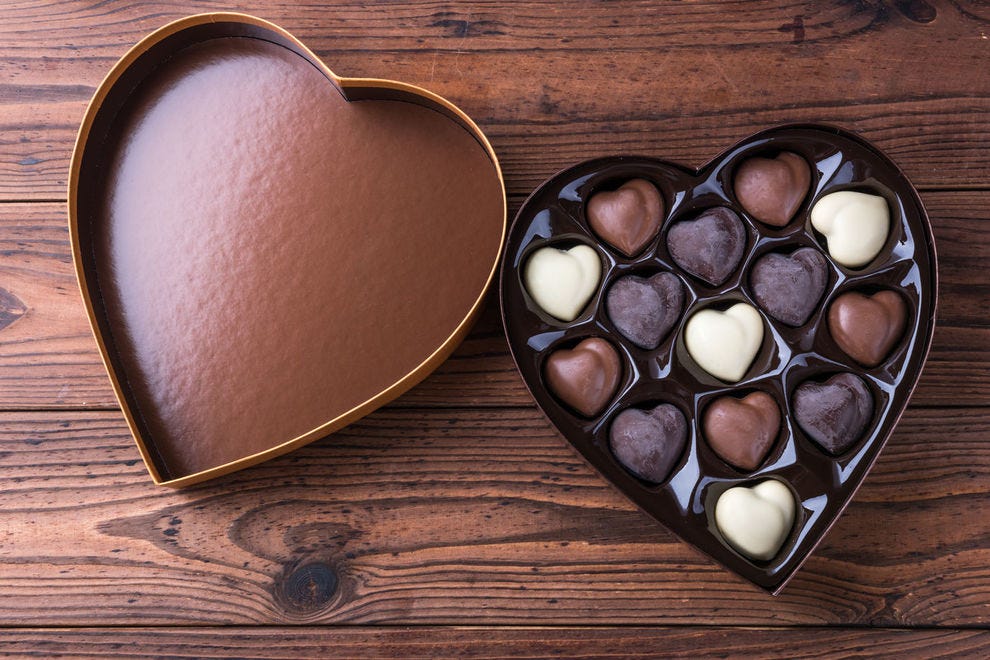 Does chocolate taste better when it comes out of heart-shaped box? — Photo courtesy of iStock / ddukang

Back in 1861, the same year Richard and George took over the Cadbury business, the company developed Fancy Boxes, which is exactly what it sounds like – beautifully decorated boxes filled with chocolates. So, using the excess cocoa butter, Cadbury made a new variety of “eating chocolates” and, in 1868, decided to sell the product in heart-shaped boxes marketed as the perfect gift for Valentine’s Day.

The boxes were so ornately designed with Cupids, hearts, roses and romantic imagery that people often kept the boxes long after the holiday, using them to save heartfelt mementos and love notes. Cadbury’s Valentine’s Day boxes were an instant hit and from then on, heart-shaped boxes of chocolates became part of the holiday’s custom.

Over the next century, the idea of the Valentine’s Day box of chocolates has been remixed, updated and revamped. Nowadays, it seems like you can get any food in the holiday’s iconic heart shape. But nothing beats a beautifully decorated box filled with a selection of sweet treats that you can share (or not) with the one you love.

We also have a travel shop, vlogs and blogs to keep you informed, educated and entertained.